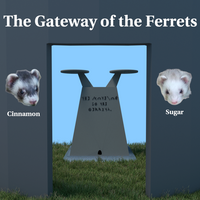 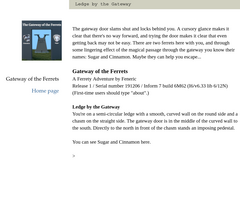 The Gateway of the Ferrets is a short piece of interactive fiction. It was written to be part of a larger collaborative effort among a group of Cragne Manor authors and set in the Planescape universe in Sigil, the City of Doors. Each piece would be independent and would start off with a portal from Sigil, and one story would get released each day. As with Planescape itself, there were huge differences in story settings, themes, and even genres, so each one would be a surprise for participating players. The only other story I know from this group that has also been released is Zarf's Advent Door, and playing both that and Gateway will give you a bit of an idea of the variety that the full group would have provided.

The Gateway of the Ferrets

Escape a dead end with the help of friendly ferrets.